When we got tickets to Broadway Show, Moulin Rouge, I thought it would be similar to the show, Cabaret in that it would have a lot of great dancing and music. Moulin Rouge did have a lot of great music and dancing but it was fairly humorous and a whole lot of fun. My husband and I sat where the Orchestra would sit. There were small tables and the area was closed off once the show started. The interesting part here was that I felt that we were immersed in the show. Performers walked around us and hit us in the back of the head with their dresses. The performers were all around us, which was pretty cool. 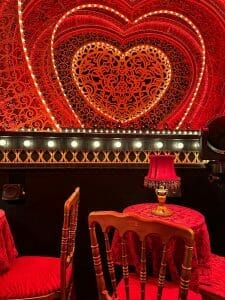 The story was quite simple. It was a story of a cabaret star/hooker, Santine played by Ashley Loren, who fell in love with the underdog songwriter, Christian, played by Derek Klena.

The Show that Santine was in where she played the leading role, was doomed for failure. The theatre company had no money and sought out investors. The Duke of Monroth, played by Declan Bennett, came in and told Harold Zidler, played by Eric Anderson, that he would buy the show and own the cast including Santine.

That’s when the love triangle took place. Satine loved Christian. Christian loved Santine. But, Santine was destined to be with the Duke.

The show had a ton of music and dancing. I didn’t realize that the show used popular music from artists like Talking Heads, Lady Gaga, and Walk the Moon. This made it more fun as the audience was swaying to the music.

The dancing was wonderful. It was all broadway style — big, bold, and well-choreographed!

The ensemble was incredible, the cast fantastic, and the decor was bold and very red! I loved the show and would highly recommend it to anyone who just wants to escape for a couple of hours and just have a fun time!