Chanukah came way too early this year. The first night was the Sunday after Thanksgiving. I usually get lists from my kids on what they need and want for Chanukah but because it just crept up on us this year, I received no lists.

It was so early that I didn’t have time to dig in the garage for my menorah’s, so I left them in the garage. I decided to pass over Chanukah this year.

As I watched my Facebook friends and family members celebrate, I had no feelings about it either way. 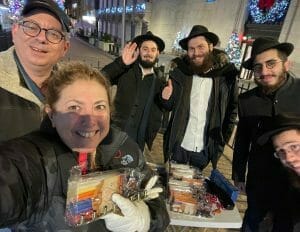 Chanukah is a minor Jewish holiday celebrating the miracle of lights. Here is the story of Chanukah from the Chabad Website:

“In the second century BCE, the Holy Land was ruled by the Seleucids (Syrian-Greeks), who tried to force the people of Israel to accept Greek culture and beliefs instead of mitzvah observance and belief in G‑d. Against all odds, a small band of faithful but poorly armed Jews, led by Judah the Maccabee, defeated one of the mightiest armies on earth, drove the Greeks from the land, reclaimed the Holy Temple in Jerusalem, and rededicated it to the service of G‑d.

When they sought to light the Temple’s Menorah (the seven-branched candelabrum), they found only a single cruse of olive oil that had escaped contamination by the Greeks. Miraculously, they lit the menorah and the one-day supply of oil lasted for eight days until new oil could be prepared under conditions of ritual purity.

To commemorate and publicize these miracles, the sages instituted the festival of Chanukah.”

The Chabad is a group of orthodox Jewish people who provide education and resources to the Jewish community. In recent years, I’ve been more and more impressed.

In 2018, I had my first encounter with the Chabad. My family and I were sitting in half of our home because the rest of it was destroyed by Sandy. It was the first night of Chanukah.

We received a knock at the door. I opened it and three young men from the Chabad asked if they could come inside and light the menorah. Since I had no idea where our menorahs were because everything that wasn’t destroyed was boxed up in our home, I let them in.

They lit the candles, said the prayer, and they were on their way. They gave us a lovely menorah which we used for the eight nights.

On the seventh night of Chanukah, my husband and I were in the city. We were walking around the Wall Street area taking photos of all the lights when suddenly, four young men approached us and asked if we were Jewish. I said we were.

“Are you celebrating Chanukah?” one young man asked me.

“Oh, you must celebrate,” he said. “Just light the candles tonight. It’s the seventh night.”

He handed me a cheap menorah with a box of candles.

I went home and quickly set up the menorah. I lit the candles and said the prayer. A chill went through my body. How could I have missed Chanukah? It’s the festival of lights. It’s the start of winter, time to celebrate and be happy. By lighting the candles, I felt I gave respect to my grandparents, their grandparents, and so on. It’s a tradition.

The next night, I lit the eighth candle and said the prayer. I was grateful that I bumped into the Chabad once again.