I remember when I was growing up and I asked my grandmother how old she was. She wouldn’t tell me. She held it back. Today in the age of transparency and vulnerability, I embrace my age. I turned 60 at the end of April.

Birthdays have always been hard for me. I’m not sure why. I would often get depressed around my birthday but I had no reason to get depressed.

Life was hard at 712 West Chester Street in Long Beach. We lived in a one-bedroom house that had a basement and an apartment upstairs. I loved my mother so much, but she was difficult. If I said one thing that she didn’t like, her whole attitude changed. There were times when she was great to talk with and other times when I just couldn’t talk with her because of her moods.  My father, on the other hand, was never home. He worked constantly. He had three jobs and his time with the family was scarce.

Life revolved around my mother and my sister. I shared a birthday with them so you could just imagine how it was for me on my birthday.

So every ten years as an adult, I would have some sort of celebration.

I tried to celebrate every 10 years after I left my parent’s home. On my 30th birthday, I had a party and ended up losing two dear friends as a result. For whatever reason, they didn’t want to attend the party and I was horrified by that. I didn’t know this until later on, but my husband spoke with the two friends and he told them that if they don’t show, that would be it. He knew how important it was for me. My friends never showed up. And, I went into a deep depression for a while trying to get over it.

I think for me I had just had my first child, started my business, and again, life was not my own. I had a lot of commitments and wanted my best friends there to support me.

I had a party for my 40th at Bridgeview. It was held upstairs in a smallish area. It was a dance party and it was so much fun. My parents were there, my sister and her husband at the time we were there, and all my college friends, friends I had growing up, and work friends were there. It was a total blast.

Brian threw me a 50th birthday party at the Vanderbilt Hotel in Plainview. It was a real club-type place. We set the theme as a “madmen” theme, appropriate for my role as the CEO of HJMT.

This time, I had more work friends, college friends, high school friends, and just couples that Brian and I met along the way as our children were growing up. We had a band and there was a ton of dancing. A couple of my friends and family who were there, are no longer with us today. But that night, we all had a great time.

A couple of days after this party, my mother passed away. She had post-polio, COPD, and an immune disorder. We knew she would die but we weren’t ready. I never had that opportunity for closure.

I lost part of my home and my cars to Sandy. My sister passed six years after my mother died having an aneurysm and stroke. And, just this past September, I lost my dad to Alzheimer’s Disease. My brother and I are the only two left from the original five living at 712 West Chester Street.

After losing my sister, I had such a burden on me. I had survivor’s guilt and felt that I should have been the one to go not her. I’m still sad that she’s gone but I’m getting to the point that I can accept what happened. 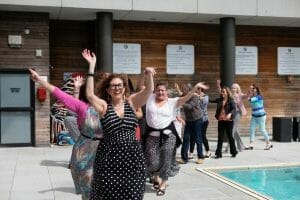 On my 60th birthday, I decided to have another party. My husband was dead set against it. But, he didn’t have that much to say because I used my own money and threw myself an amazing party at the Allegria Hotel on the rooftop. I invited 90 people but I could have easily invited more. I had so many people that reached out to me on social media and if I thought about it, I could have invited a lot of work friends and colleagues. But I had a limited budget so I stuck with the minimum of 75 people, hired a DJ, and held a brunch. There were so many people at the party that I felt I wanted to give back to.

My runners and triathlon team help me every day deal with the struggles of everyday life. My high school and college friends and good friends I met along the way have done so much for me.

I am truly blessed and grateful to the people who are now in my life. At my party, I let everything go. I let the guilt that I had for my sister go. I let the anger go that I had toward my mother. And, I let the heaviness that I felt dealing with my dad during his course of Alzheimer’s Disease go.

Anyone who knows me knows that I needed this party to just let it all go and take that moment to just focus on the wonderful people and the amazing family I have.

Thank you for being part of my blog family. I truly appreciate you and wish I could have invited everyone who has touched me. But since I couldn’t, I want you to know that I appreciate you!

Note: my birthday was a month ago.