I flew in on Friday, August 5. I knew it was my sister-in-law, Andrea’s birthday, and wanted to spend it with her. When I got into town, she told me she started the day with a fall.

She’s a new runner and tripped over a pothole and went flying. Thankfully, she was okay, just a bit bruised up.

We went to a sushi restaurant called Saiko-i in Deerfield Beach. It was a lovely place but so very hot. They had the walls exposed and they weren’t blowing enough cold air. In 90-degree and humid weather, it felt uncomfortable. There were fires blowing from the hibachi area and we were in close proximity.

I had shrimp hibachi since I had sushi the day before in New York. My brother and his son, Ben, had Udon Soup, and Andrea, Karen, Andrea’s first cousin, and Jacob had sushi. It looked so fresh. They enjoyed it immensely.

I woke up to the clagging of pots and dishes. I had slept over at my brother and sister-in-law’s place and their son was getting ready for work. It was 5 am.

Since I typically get up at that time, I got up as well and went into the kitchen for some coffee.

Following that, Jacob, Andrea, and I went out for a nice brunch at Yolk. It was so nice and relaxing and the food was yummy too! 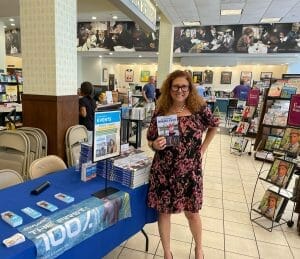 My first book tour was held at the Boca Raton Barnes & Noble was incredible. First I saw my old client, Terry Smolev. It was so great to see him. Next, Marilyn Weinshank came down from Port St. Lucie. I was thrilled.

I saw so many people I hadn’t seen in years and it was truly wonderful. There were about 25 people there and the store was thrilled. It was standing room only! 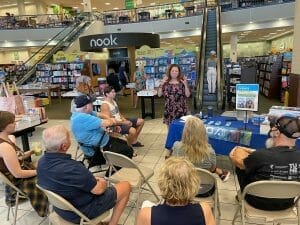 I talked about the book and then read a chapter about an event that happened in Las Olas, Florida, which was close to Boca. 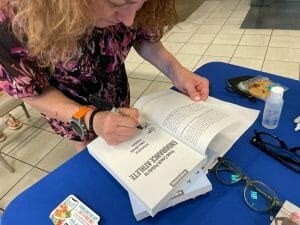 The winner of the bookmark contest (I typically hide a bookmark and post where it is on social media) received a Sumarpo bathing cap and a bottle of Zealios Race Relief. 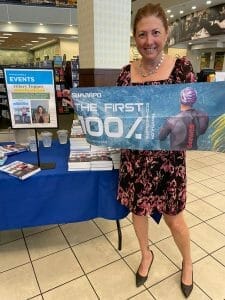 After the book tour

We all went to the Bonefish Grill on Glades Road. My brother is the managing partner there and he served us free appetizers. Sharon Sultan, who I hadn’t seen in many years was there with her husband. We had a lovely time catching up. Eric and Debbie Schlossman aslo came. We also got an opportunity to catch up.

After happy hour, Deb, Eric, Andrea, Jacob, and I had dinner in the restaurant. It was incredible! When the checks were paid, Deb, Eric, and I went to get ice cream in Boca. Yummy! 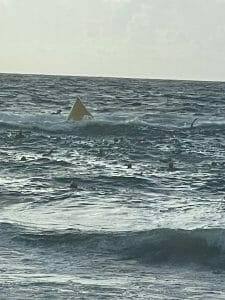 I was supposed to do a 2-mile swim in the Atlantic Ocean but when I got there, the water was ridiculously rough. So, I didn’t do it. I wanted to make sure I felt well enough and at that point, I was just getting over pneumonia. So, I went out to breakfast with Andrea and Jacob and then headed to the airport instead. 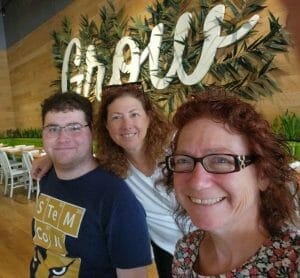 It was a wonderful, whirlwind weekend in Boca. I can’t wait to go back!