Every morning at sunrise, if you head over to Field 6 at Jones Beach, you will see a slew of fishermen.

The other day, I was curious. I was planning on riding my bike but when I got to the beach, my tire was completely flat. (I have special run to flat tires that are tubeless, so I was unable to pump up the tire.) Instead of going home feeling defeated, I took a walk with my friend on the boardwalk.

I had just come back from surgery and been three weeks out, I wasn’t sure how I would feel walking. But, I felt okay. My friend mentioned that we should go by the water to take photos of the sunrise. I agreed. 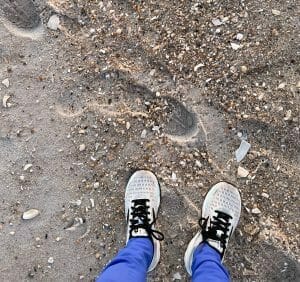 When we walked down by the water, we saw all of the fishermen. They were socially distanced. They wore waterproof boots and what looked like rain gear which protected them from the cold water.

I went over to the first fisherman I saw. “What are you catching out here?” I asked him.

“Striped Bass,” he told me.

I was surprised. The guy was not even in the water. Does the striped bass get that close to shore? I asked him.

He told me that they do and because of global warming, he only caught about five this year. In prior years he had caught hundreds at this point in the season.

I asked him if they were any good. He said, “I don’t like them. Some people do but I think they taste different than in years past.”

After telling the fisherman to have a nice day, we continued walking.

The visibility was incredible. We could see the Robert Moses Bridge and the Fire Island lighthouse. The sky was breathtaking at this point. 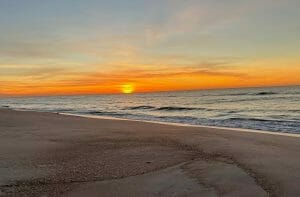 This time, I stopped some guy who was standing near the Fishermen. I thought he might be the leader of the pack. I asked him that, and he told me that he left his gear in the car. He said he only knew one guy out there.

“What do you enjoy about fishing?” I asked him.

“Oh no, I have a lot of friends who love what I catch,” he said. “I give them away. People love them.”

There’s a whole world out there when you get up early. Watching the sunrise on the horizon, the beach is so magnificent to see, and learning about a whole new sport was fascinating to me. When the second fisherman said that he’s getting tired of the sport, I asked if he wanted to join our running group. My friend laughed. I was serious…