Book tours could be hit or miss. Some of them have a ton of people and others have very few. Luckily, the Sarasota book tour for From Couch Potato to Endurance Athlete had about 10 people.

I flew into Tampa and drove to Sarasota which was about 90 minutes away. I was supposed to do a triathlon in Sarasota but due to an illness, I was unable to do it. So, I came into town anyway to do these book talks.

The Barnes & Noble Sarasota set me up in the front of the store and people who were coming into the store saw it and sat down and listened. I loved that the book manager and her associate also sat in on the talk. (I have found that independent booksellers do that, but many of the Barnes & Noble stores have not.) 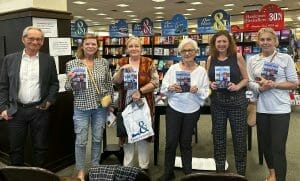 As always, I thanked the sponsors – BioTropiclabs.com for sponsoring the west coast, the Florida tour. I also thanked Sumarpo, a wetsuit company, and Zealios, a multisport company, for offering prizes to the audience. (By the way, BioTropicLabs.com is offering 20 percent off all their vitamins and supplements by using code: HILARY20 at checkout.)

In addition to my presentation and reading of my book, Suncoast News Network showed up and interviewed me on the book and my journey. You can see the interview here: https://www.snntv.com/story/48095661/from-couch-potato-to-endurance-athlete-author-visits-sarasota

After leaving Sarasota and really enjoying the area, I drove back to St. Petersburg. I love that area and have done a couple of triathlons there so I wanted to walk around the town one more time.

I parked on Fifth Avenue and First Street and walked over to the marina area. It was fun to go back into the stores I really enjoyed going to the first time I was in St. Petersburg.

After about an hour or so, I went back to my car and finished the drive to Tampa. 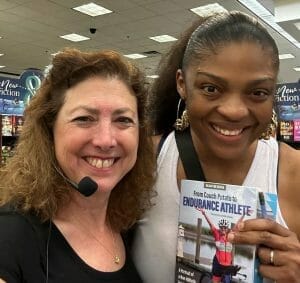 That Monday, January 9, I had a book talk at Barnes & Noble in Tampa.

This one didn’t feel as organized as the others. I had to ask for the books. They were still in a crate in the back.

But, all in all, it was a decent turnout. Unfortunately, people who told me they would be there never showed but fortunately, I was able to draw a little audience of people who came into the bookstore or who were sitting in the cafe. I enjoyed the questions and the comments from the community.

Even if there are three people or 50 people, it’s still good to get out in the community and talk with people.

I’ll be talking at the Island Park Library on Saturday, January 21 at 2 pm. After that, on Thursday, January 26 at 6:30 pm, I’ll be at the Bayport BluePoint Library in Suffolk County.

After that, my next tour will be in Denver and Boulder on February 16 to 20. I hope to see you there!